KZ ( Definitley not the official .us Forums)

I haven't even upgraded to a Wii U yet, but I know I'd play this and I think the kids would absolutely love it too. The following video is the Super Mario Maker '10 Mario Challenge' which is the most basic part of the game:

And here is the Kotaku review: 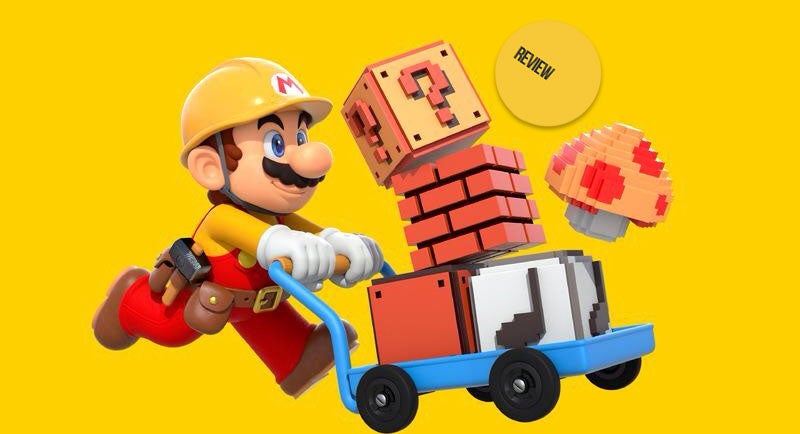 Mario Maker feels like a game that should not exist.

Consider this: Nintendo is the sort of company that has specific ideas about the way Bowser would drink a cup of coffee in a movie. It is the sort of company that would develop a height graph, so game developers always know what size a character can be in relation to other creatures in the Mushroom Kingdom. Nintendo is very particular about how it wants the world to consume its games, and this attention to detail is part of what makes Nintendo great. Nintendo is the Disney of the gaming world; a controlling, creative titan that creates beloved characters with shocking regularity.

Enter Super Mario Maker, a game about making Mario games. In it, people other than Nintendo are free to use official Mario iconography to create ridiculous levels, then cover those levels with dicks. Is Nintendo really just handing over their playbox and letting people loose with it? Can I seriously take Nintendo’s most famous mascot and put him through a hellscape of my making…with Nintendo’s blessing?

Mario Maker has two major components. There’s the creation suite, which allows players to make their own levels. Then there’s the play hub, where you can simply enjoy Mario Maker levels made by other people.

There, you will find the “10 Mario Challenge,” a mode where you have ten lives to beat eight random levels made by Nintendo designers. While it may be tempting to jump into stage creation right away, I found that playing through the 10 Mario Challenge was a better idea, at least to start out.

Nintendo has made a point of creating short, punchy levels that defy the expectations they’ve set over their years making Mario games. It’s a provocative mode that plays with the Mario formula, at once evoking nostalgia while also telling you to forget what what you think you know about Mario. This, in turn, encourages you to experiment beyond what you might think is possible in your own levels. The 10 Mario Challenge is instructive in the most hands-on way possible.

In one level, you might find an underground party when you go down a pipe. In a different level, you might find that the only thing that’s standing between you and the flagpole is a stack of giant enemies crowned by Bowser, and you have to figure out a way to defeat them all without getting hit by a projectile. 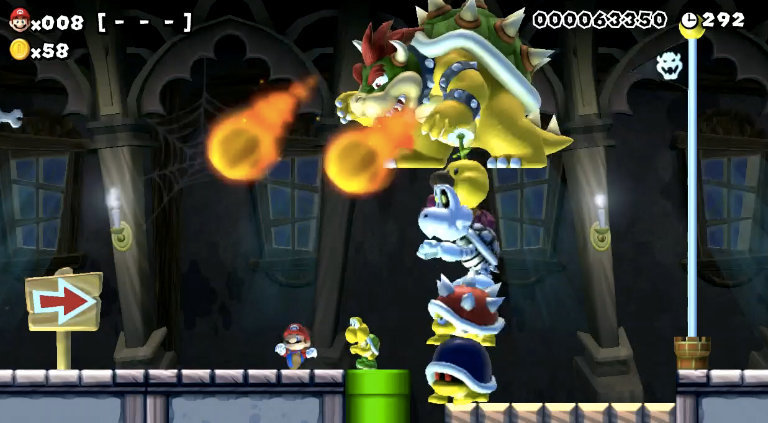 In another level, you might turn into a spring after ingesting a mushroom. Its the sort of thing that makes me wonder just what was stopping Nintendo from making levels that felt this fresh in the first place. This is Nintendo, letting its hair down—and the result is a game that feels exciting and new, even though yes, we’ve been stomping Goombas with our favorite plumber for over thirty (!) years now.

This sense of vitality is everywhere in Mario Maker, from the weird levels down to the vibrant menus. Mario Maker looks less like what you’d expect an official Mario game to look like, and more like a remix that could have been made by a studio like Crossy Road and Pac-Man 256-maker Hipster Whale. Even the some of the original sprites have been updated—they now have finer details that previously weren’t there. What I’m saying is: Mario Maker looks hot as hell. 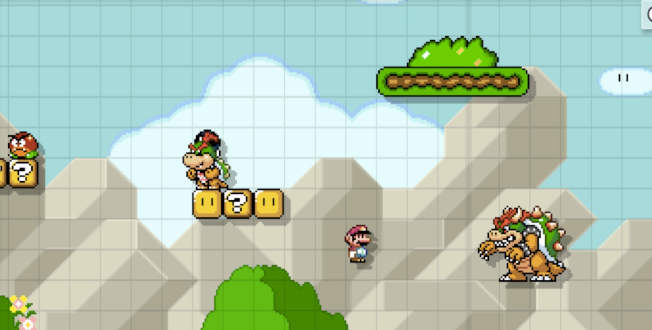 Let’s talk about level creation. Ostensibly, this is the entire point of Mario Maker: to create stuff. This was somewhat of an awkward proposition for me, someone who struggles with open-ended creativity—I was the kid that didn’t know what to do with Lego. I thought I wouldn’t find much to like in the level-creation process, and instead wanted to use Mario Maker as a means to play stuff others create. But Mario Maker is so welcoming that I found myself happily experimenting with Koopas and question-mark blocks right away, eventually graduating to full-on levels that I was proud of.

Any element you might find in a 2D Mario game, you can just place on your level with a simple tap.

Anything that can occupy a large space can be placed and dragged and made longer. You can change the style of your level based on the different eras of Mario games across the years, from the original up to New Super Mario Bros U. Eventually, you’ll even unlock special sound and visual effects that can add an extra layer of liveliness to your levels (I’m sure the community won’t abuse this at all!) It’s the most intuitive game creation tool I’ve ever used; it does for games what the point-and-click did for photography—only with way more spirit. When you place something down in a level, the level actually sings for you. Building an entire course sounds like harmony. In this sense, Mario Maker feels revolutionary. Even a kid could make a level with ease. Why aren’t there more tools like this, but for other kinds of game?

The tools themselves hide wonderful secrets. Shake a green Koopa, and it’ll turn into a red Koopa. Shake a Lakitu, and you’ll be left with its cloud—which you can actually ride. Add a mushroom to an enemy, and it’ll grow larger. All of these components stay frozen them until you press “Play,” at which point the level goes live and you can test out whatever you made. And if Mario dies during this testing phase, it simply reverts back to creation mode, which allows you to tweak as you see fit. I found myself swapping between the frozen and live mode frequently, as I felt out what made the most sense for that particular level.

Part of the reason why Mario Maker feels so generous is that, by giving me this box of toys, Nintendo has given me a first-hand look at what makes Mario, well, Mario. It’s given me a new appreciation for what they’ve created in the past, especially when I felt stumped as to how to make a level of mine pop. Even the O.G. 1-1 has a quiet brilliance that may not be immediately obvious until you break it down, square by square, and see the subtle ways in which Nintendo has been gently guiding us all along.

My biggest complaint about Mario Maker’s tools is that you can’t use them all from the outset. You only have access to a limited number of things at the start, and it takes nine days of actively creating levels for at least five minutes to unlock everything on offer. UPDATE: I’m hearing reports that some copies of Mario Maker have the waiting time patched out. I played my U.S. retail copy tonight and was told I had to wait until tomorrow to unlock more stuff and haven’t been prompted to download an update—so YMMV. It’s the most Nintendo thing ever, and they justify it by saying that this is their way of easing you into the tools. They want to make sure you understand every set of objects they have before actually letting you tinker with more advanced stuff. It makes a sort of sense, but it’s still kind of annoying. This, in conjunction with the incredible number of costume unlocks, make Mario Maker feel like more than just a toolbox. It’s game design, gamified. Level creation requires assets. You’re going to need to work for those assets, if not purchase a few Amiibo.

Once you build a level, you can save it to your system or upload it to the web. Before you can share it with others, you have to actually beat your course—which means you can’t make anything impossible, or beyond your own skills. I appreciate this reality check, because it means that online levels can’t get too out of hand.

From there, you wait. You’ll be notified whenever someone plays your level, or leaves a comment on it.

You can also get a sense of how difficult your course is based on completion percentages, or by taking a look at where on your course people have died. This information is also visible when you zoom in on other people’s courses, too.


[This level is way harder than I intended—barely anyone can beat it!]

Nintendo has basically built a mini social network just for Mario Maker called “Course World.” Through it, you can check out a variety of different courses people have uploaded, all sorted into different categories. There’s the “Featured” tab, which is front and center.

I’m not 100% clear on how Nintendo picks these courses, or if they’re automated, but either way, the courses that become featured are the most visible courses in Mario Maker. That is where you want your courses to end up, which also means you have to deal with creating something palatable to other people. You have to pick a good name, and have a good concept, to facilitate being noticed—otherwise, nobody will play your stuff. This, I assume, will be a point of tension for some players who don’t have some marketing savvy.

My version of Mario Maker only connects with people who have the game early. There are a very limited number of people online right now, likely microscopic in comparison to what the actual community will be like. Still, it’s obvious that Mario Maker, like all social media, will have its share of politics. There are already people who come up with cool ideas that gain traction, only to be aped by other hopefuls who then end up gaining more visibility— the Jason Ostrovskys of Mario Maker, essentially. There are already people who create levels based on well-known franchises, and end up piggy-backing on that success even if their course isn’t particularly good. There already are trends and fads, like courses that play themselves. I predict there will also be creators who become popular and known within the community, only to become scorned because they’re too visible—or at least, I found myself annoyed at times that certain names seemed to be everywhere on Mario Maker’s social hub. I have a feeling the online Course World is going to be a fascinating place once Mario Maker actually releases.

If you see a course that you like on your Course World feed, you can download it for future use/tweaking, or you can “star” it. Stars function similarly to Likes on Facebook, in that the more stars a course has, the higher they’ll show up on the “Star Ranking” tab on Course World. And the more people who play and like your levels, the more courses you can upload. You can also follow specific people through Course World, and the game will notify you whenever those people make new stuff. It’s a system that rewards popularity, but I’m hoping that the game still leaves room for less conventional Mario levels too. It’s hard to say just yet.

As for what you’ll find online, well, you get a little bit of everything. If you try the 100 Mario Challenge, you’ll get a grab bag of levels, some of which are really creative, some of which are clearly just someone fucking around.

There are themed levels that you can unlock such as Metroid, Mario Kart, roller coaster, and Donkey Kong. Seems pretty cool. I'd play the crap out of it. I loved Tenchu 2 on the PS2, and it's level creator. My brother and I played the hell out of that, making levels for each other and trying to defeat them.